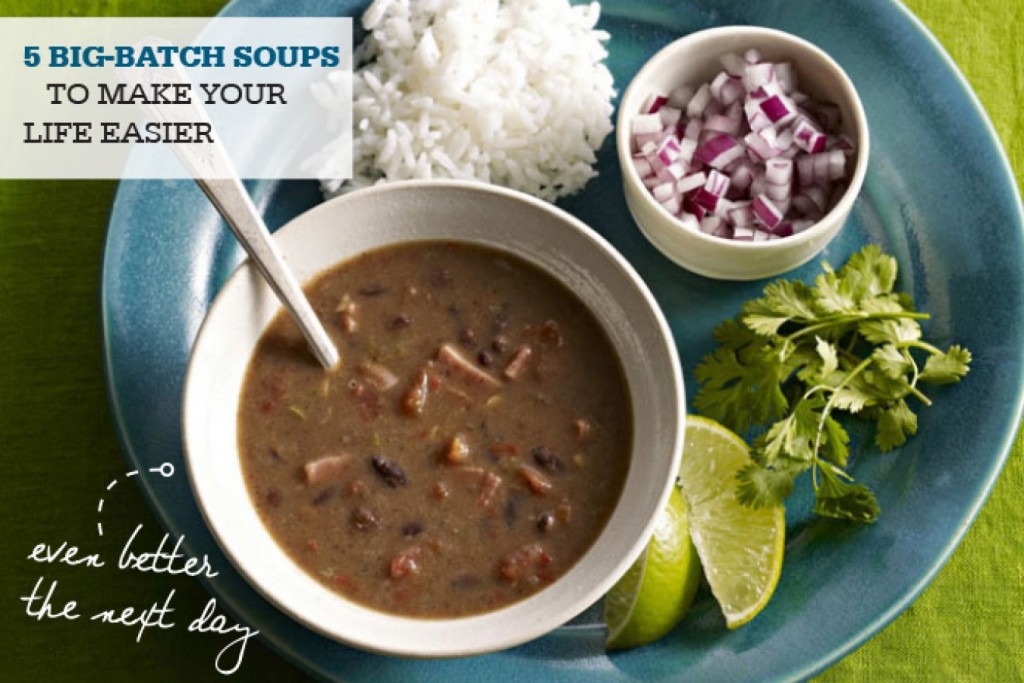 A bowl of soothing, steaming soup could be the perfect comfort food—but personally,get the most comfort when they’re frozen solid and neatly arranged in my freezer. (Anyone else inventory their freezer meals for stress relief? No? OK, never mind…) Seriously, there’s something about the knowledge that no matter what life throws at me (sick kiddos, late nights at work, whatever), I can pull a batch of my favorite soup out of the freezer, toss that sucker in the microwave and nobody goes hungry. Nothing beats that peace of mind.

And since I’m a sharer, I’m bringing you the five soup recipes I rely on when the midwinter crazies hit. You can eat some at dinner one night and know that you’re set for lunch the next day, or you can freeze a whole or half batch for those nights when you need food, like, now. The choice is yours!

Slow-Cooker Cuban Black Bean Soup: Want to talk life-made-easier? This spicy bean soup does the job—not just after it’s made, but in its gloriously easy slow-cooker preparation. Ten hands-off hours in the cooker later, I’m opening the lid to a 12-serving batch of soup that freezes beautifully. (And if I’m planning to top my soup with chopped onions, cilantro and lime wedges, I don’t bother freezing ’em—they’re best added fresh on the day it’s served!)

Chipotle-Quinoa Chili: I love, love, LOVE keeping this hearty chili in the freezer—and my family loves eating it, so double win. Why am I going into raptures over it? Unlike brothy soups, it packs a filling punch from fiber-rich beans, quinoa and an abundance of veggies—so no surprise that it’s a Healthy Living recipe.

Slow-Cooker Creamy Lentil Soup: I get the conventional wisdom that you don’t freeze creamy soups—really, I do! But this buttery lentil soup is too good not to have on hand, so I’ll let you in on a secret: Just freeze the soup WITHOUT adding the cream cheese. When you’re ready to serve, whisk that cream cheese deliciousness into the hot soup and bam—problem solved!

Chicken Tortilla-Lime Soup: Please promise me you’ll use fresh limes to make this classic soup. The burst of citrus just makes the broth SING—and it’s a tasty, tasty song, one that freezing doesn’t muffle in the least. Just one quick tip: Wait to add the tortilla strips, cilantro and other garnishes until after you’ve defrosted this soup. I know, it’s an extra step…but for a crunchy tortilla topping, it’s a step I’m willing to take!

Hearty Mushroom-Beef-Barley Soup: If you have meat lovers in your family, keeping a batch of this super-savory soup on hand will make them very happy campers. Between bits of salty bacon, chunks of beef and tender slices of mushrooms, this soup is an umami explosion—and it freezes like a champ, too.

Want more soup recipes to soothe your soul (and save your sanity)? We’ve got ’em!